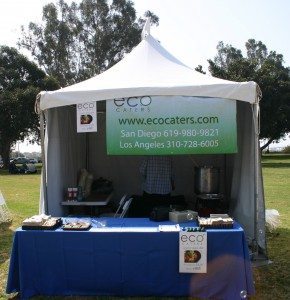 We spiced it up on Earth Day in San Diego at the 19th annual Earth Fair with a tasty vegan chili! It was held in Balboa Park and turned out to be another beautiful day in San Diego. We sold over 500 bowls of organic vegan chili with some vegetarian toppings including cheese, sour cream and chives. For those looking for some extra kick, we also provided a spicy medley tossing in some cayenne pepper to boot. The chili was made with organic ingredients including fresh tomatoes, onions, quinoa, green, red and yellow peppers, zucchini, squash, celery and lots of great spices. We served the chili with biodegradable and compostable bowls, spoons and napkins keeping with the Earth Day theme and business as usual for us.

Most of the products were bought from local organic farmers at the farmers markets around San Diego. We always go to the local farmers first, then to northern California farmers and last resort is local organic grocery stores including Peoples Organic Coop in Ocean Beach, Trader Joes, Henry’s and Whole Foods. By the end of this year we will be sourcing 99% of our products from local sustainable organic farms…and those farms will be posted on our site. So Earth Day 2008 turned out to be a success, we sold lots of organic vegan chili, listened to good music, gave away a ton of business cards (printed on recycled paper with soy inks of course) and signed lots of people up for our organic email recipe list.

Shoot us an email to recipes@wordpress-875666-3032804.cloudwaysapps.com if you are interested in joining.  We look forward to making every day Earth Day from here on out!